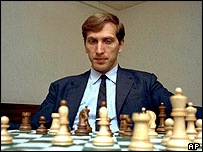 News organizations everywhere are reporting that former World Champion Bobby Fischer has died of "an unspecified illness" in Iceland, where he had made his home in exile in recent years. He was 64.

Fischer was born at Chicago's Michael Reese Hospital in 1943 and grew up in Brooklyn, becoming the youngest U.S. chess champion ever, at 14. He beat Boris Spassky for the World Championship in 1972, after which he became reclusive and his behavior increasingly bizarre. He never defended his title, and except for an unsanctioned rematch with Spassky in the early 1990s, he never played formal competitive chess again.