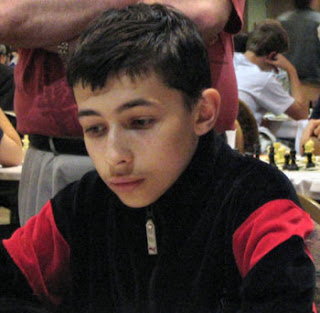 The Chicago Blaze became the latest victims of the Queens Pioneers’ rolling juggernaut last night, falling to the formidable squad in their USCL match by a score of 3-1.

It was the worst defeat yet for and the first match in which no member of the Blaze won a game. The going was roughest on the top two boards, where FM Florin Felecan lost to strong GM Alex Stripunsky and IM Emory Tate became the latest notch in the belt of IM Alex Lenderman (pictured at left), the 19-year-old pheenom who has won all of seven of his games this season. Stripunsky and Lenderman are two of the reasons the Pioneers (6.5-1.5) are tied for the best record in the league. (See Elizabeth Vicary's interview with IM Lenderman here.)

For the Blaze, the only bright spots were boards three and four, where IM-elect Mehmed Pasalic and IM Angelo Young, both undefeated this year, drew their opponents.

You can’t win ‘em all, of course, and the defeat followed a few weeks of mostly solid performances for the new Blaze team, which had raised its record to 4-3 after last week. That record now falls back to an even .500, and we hang on dearly to our playoff hopes. The last two matches of the regular season, against and , will be decisive.

The Pioneers are an impressive team and deserve their success. To get where they are they have had to overcome obstacles, such as an undistinguished record last year, their first, and what has to be the most ill-conceived name and logo in the league. (Trust me, I was born and raised in ’s largest borough. Nothing about even remotely suggests cowboys or pioneers or sunsets. None of it resonates. But when you’re winning, who cares?)

On the bright side, Blaze Manager Glenn Panner gave the team’s non-player personnel—all of whom very much need chess improvement—an enjoyable lesson in the Scotch Game using Charousek vs Von Popiel (Budapest, 1896) and Bruce Pandolfini’s Chess Life column on the game from August 2006 (USCF membership required).

Many thanks to Maret Thorpe for serving as tournament director last night for the second time this year. Here are the games:

Your Moment of Zen XI 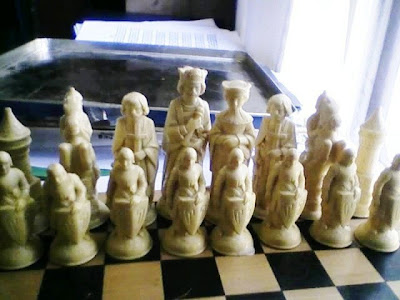 We beat Tempo, just not as resoundingly as last time 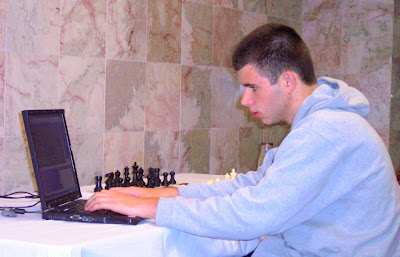 Ilan Meerovich (above) made a triumphant return to the Blaze lineup. IM Jan Van De Mortel (below) beat FM Todd Andrews for the second time this year. 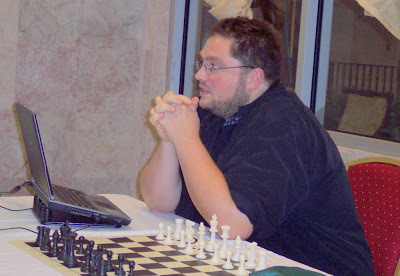 It was a different kind of match from the last time the two teams met, but the result that mattered was the same, as the Chicago Blaze defeated the Tennessee Tempo last night for the second time this season.

The Tempo, which had definitely retooled since the 4-0 drubbing they took at the hands of the Blaze in Week 3, this time inflicted some damage in the match, which ended 2.5-1.5 in Chicago’s favor.

Meerovich Returns
The evening saw the triumphant return to the Blaze lineup of Niles North High School chess star Ilan Meerovich, who beat FM Jerry Wheeler on Board 4, giving Ilan a 2-0 record on the season.

The other Blaze victory came from IM Jan Van De Mortel, who beat the Tempo’s FM Todd Andrews, just as he had in the first match. This time, however, Tennessee got in some licks. IM Ron Burnett avenged his earlier loss to Chicago’s GM Nikola Mitkov by beating him this time on Board 1; and FM Peter Bereolos, who lost to IM Angelo Young in the team’s previous encounter, this time managed to eke out a draw against IM-elect Mehmed Pasalic.

Playoff Picture Improves
The victory gives the Blaze a 4-3 record in seven matches and lifts the team over the .500 mark for the first time in its young history. It certainly boosts our playoff chances with three weeks left in the regular season, though just how much it helps will become clearer after the rest of the leagues plays on Wednesday night. More on this later.

Many thanks to Tom Sprandel of the Evanston Chess Club, who served as tournament director for last night’s match. Here are the games, by board number: