Ending on a High Note

Two Ray kids led the way in the last major tournament of the year. 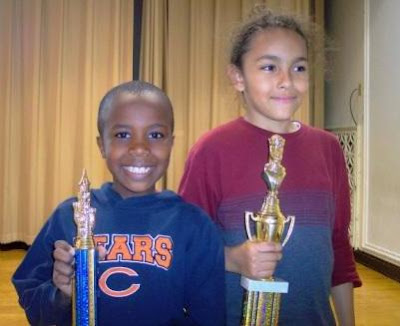 It was the last tournament of the year from the Youth Chess Foundation of Chicago, and two Ray School chess players grabbed top honors. Second grader Abdel Raoul, playing in only his second YCFC meet, nearly won first place in the 60-player beginner, section with a perfect 5.0/5 score in regular competition. He fell to second when he lost a tiebreaker game--his only loss of the day--to an older player from another school.

Ray fifth grader Phillip Parker-Turner, always the man to beat in the advanced section, himself managed to beat back all challengers with a perfect 5.0/5 score, to take overall top honors in the entire tournament.

Thanks to Mike Cardinale and the rest of the YCFC crew for another great year of free chess in the Chicago public schools. Thanks to Tonti Elementary School on the Southwest Side for hosting the meet.