Chess and the Beast Within 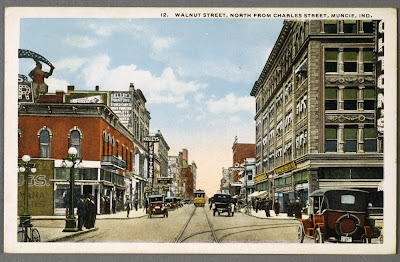 From that quitessential Midwestern burg of Muncie, Indiana—Middletown to you sociologists—comes fresh evidence of chess’s ability to drive otherwise well-behaved people to depravity—as if we didn't already know it could. The Muncie Star Press reports:

“According to court documents, [Michael A.] Madden told police that after the argument broke out during their chess match, his alleged victim tried to attack him three times.

“In one instance, Madden said, he held the man down, by his throat, on a couch and used a knife to ‘flick’ the victim’s nostril, creating a small cut.

“The man was cut on the left side of his abdomen when he attacked him for a third time, Madden said. Police said the victim had a softball-sized wound.”

Losing hurts, and losing at chess hurts more because it's your own fault. You beat a person at chess at your peril.

My Game with Simon

It was two years ago today, on an uncommonly warm afternoon during a post-Christmas visit to my native New York City, that I played the game below with Simon, one of the regular chess players in Washington Square Park. I didn’t realize at the time that he was homeless, though knowing the chess scene in the park it doesn’t surprise me.

As for the game, I played badly. I wouldn’t say Simon played a strong game, though he certainly played better than I did and deserved to win. I think you’ll agree that when I resigned on move 40 the game was lost.

I don’t know where Simon is today or whether he’s still homeless. I hope he’s well. He was a nice guy, and I enjoyed our game. 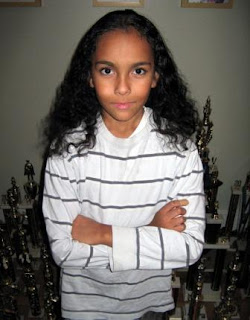 Ray School sixth-grader Phillip Parker-Turner is the number-one eleven-year-old chess player in the state of Illinois, according to the latest ratings supplement from the United States Chess League. Phillip, whose rating has risen sharply this year, is now at 1631, which makes him number 65 nationally in his age group and higher than any eleven-year-old in the Land of Lincoln.

Phillip won another tournament earlier this month, finishing first in the Advanced section at the Youth Chess Foundation of Chicago meet at Wells Prep.

Ray was a big factor in that event overall, it turns out. Acquiting themselves well while being forced to play in the tournaments's combined Intermediate/Advanced section were Ray School's Abdel Raoul and George Vassilatos. The competition there is really tough, but both boys scored victories.

Making what may have been her tournament debut was George's youunger sister Angeliki Vassilatos, who also got on the board with a victory. Ray’s Oliver Jiang, a player with whom I admit I’m not familiar, scored a very impressive 3.5/5 to finish 26th among 129 players in the Beginner section.

Congratulations to all Ray chess players, and good luck in 2010. The Perils of Doing History

How the Beatles won the 1965 Super Bowl at Shea Stadium

Your Moment of Zen

This one goes out to Zack Fishman.

Young is an All Star

Congratulations to IM Angelo Young of the Chicago Blaze for being named an all-star in U.S. Chess League's first team. The league has first, second, and third all-star teams, and Angelo is Board 3, behind GMs Hikaru Nakamura and Boris Gulko, on the first team. With NM Eric Rodriguez on board four, that's one heck of a team.

This comes as no surprise whatsoever, of course. Angelo was undefeated in six USCL games this year, extending his undefeated streak from the 2008 season. He's never lost a USCL game.

It's hard to find anything new to say about Angelo's extraordinary performance that hasn't been said before. He won the league Upset of the Week prize twice (a record), and won a game on Board 1 against a much higher rated player in a match where Angelo was filling in at the last minute for a sick teammate. Amazing.
Congratulations, Angelo!
Cross-posted from the Chicago Blaze blog.

Quotation of the Week

“Back in the 1980s, I was embarrassed when I started routinely losing to computers. Now I lose to my telephone . . .”

From the master himself. Happy holidays, everyone.

In “stunning reversal of fortune,” losers are heroes in tiebreaks

Congratulations to the New York Knights, who have defeated the Miami Sharks to win the 2009 U.S. Chess League Championship. Last night's regulation match ended in a draw. As the USCL site reports:

“For the fourth year in a row the USCL Finals came down to a blitz tiebreaker. Two players lost during regulation, GM Giorgi Kacheishvili and IM Alejandro Moreno Roman. In a stunning reversal of fortune, both of these players were heros in the blitz tiebreaker. Moreno Roman knocked off everyone on New York's team except for Kacheishvili. Kacheishvili then turned around and did the exact same thing to Miami, finishing things off by defeating GM Julio Becerra with the black pieces.”

We have been remiss, I must admit, here at the Knights of Castle Kimbark, at covering the fairly exciting post-season action in the USCL, and as it happens I don't have time to redress that neglect at the moment with a lengthy post (all the usual excuses), but go to the USCL site to see all the playoff games.

In due course we'll try to bring Blaze fans up to speed on the thrilling 2009 USCL postseason.

Nice piece, no? So much so that even the Red Sox plug at the end doesn't ruin it.

Tribune reporter Colleen Mastony had a delightful piece on page 2 of last Thursday’s paper about the sale of Leon Despres’ library at O’Gara’s Bookstore on 57th Street. The late former alderman and longtime Hyde Park firebrand, who died earlier this year at 101, was known for his progressive activism and fervent opposition to Mayor Daley the Elder, but less well known was that Len was also an omnivorous reader and polymath.

As Mastony reports, his books bear witness to his phenomenal life, enshrining inscriptions from fellow Chicago greats such as Studs Terkel, Lois Weisberg, and Mike Royko. She writes:

“In some ways, bookshelves are like mirrors; they reflect a person's life, revealing a mosaic of thoughts and ideals. ‘There is a certain intimacy, a view into very private things about a person that you get by looking at their books,’ said Douglas Wilson, the owner of O'Gara & Wilson. . . .

“Despres was meticulous with his library. He tucked articles and correspondence into dust jackets. He never dog-eared pages and rarely wrote in his books, except to make a small dash in a margin with a pencil. When he took notes, he put them on loose leaf. 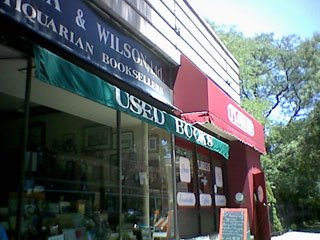 “‘He just loved his books,’ said Despres' son, Robert. ‘Among the reasons he said he didn't want to move out of the apartment was that he loved being surrounded by his books.’

“At the end of the summer, a small sign went up in the window at O'Gara & Wilson: ‘We are honored to sell fine books from the personal library of the late 5th Ward Alderman Leon Despres (1908-2009).’

“On a recent afternoon, a young law student came into the shop. The student greatly admired Despres and marveled at the stories of his life: the time that Despres was dispatched to Mexico to deliver a suitcase to Leon Trotsky, the labor protest that Despres had helped organize in 1937, the single-minded way Despres had stood up against Mayor Richard J. Daley -- who often retaliated at City Council meetings by having Despres' microphone switched off.”

That student ended up buying a copy of Chicago: City on the Make. It cost him $125, but considering it was inscribed to Len by author Nelson Algren himself, he must have thought it was worth it.

It’s a fine Hyde Park tale: books, O’Gara’s, and Leon Despres. Consume these stories while ye may: there’ll be none of them in Age of Kindle.

The Knight of the Iguana*

There’s some good news on the local chess front in the Windy City. Since my panicky post last summer about the imminent demise of the Chicago Chess Meetup Group, people have stepped up to rescue the group from extinction. Particularly active in the institution’s revival has been NM Bruce Kovalsky, who as far as I can tell moved here recently from the West Coast and has since put a lot of energy into chess organizing. First Bruce was scheduling meetups at various Starbucks on the Near North Side. Now he’s putting one together for the Iguana Café at 517 North Halsted on December 17. I’m told these get-togethers are a lot of fun. Go here for more information about the December 17 event and here to sign up for the Chicago Chess Meetup Group.

This is a good chance to get out of the house and away from the Internet, to meet some nice people, eat some good food, play some real, over-the-board chess, and support your local chess organizer.

* My apologies to those of you who are allergic to bad puns. Sometimes I just can't resist. 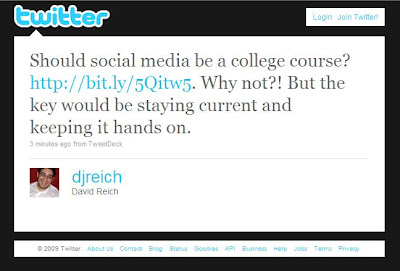 Your moment of Zen. Submitted for your consideration without comment. 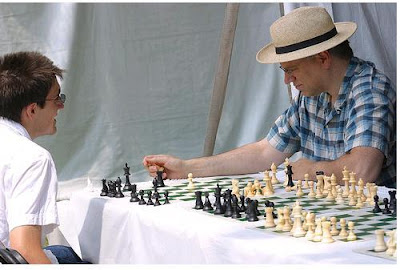 In an auspicious development for the chess blogosphere, veteran Chicago chess expert and former Illinois Chess Association President Bill Brock has just established the Chicago Chess Blog, which will focus on anything and everything related to chess locally. This is good news. Bill is a strong player, a trove of knowledge about Chicago chess from having lived and played here for many years, and an inveterate and outstanding annotator, among many other things. He’s already filled the site with a prolific assortment of game analyses in just the first few weeks.

And in a move that I think bodes well for the blog’s success, Bill has decided not to go it alone but to invite an assortment of prominent Chicago-area chess players, organizers, bloggers, and fans to join him as regular contributors. Some less prominent ones, too, like me.

Please check it out.

The Hand is Quicker than the Eye

See if you can make sense of this now-famous video of the Armageddon match (don't you love that term?) that decided the 2008 U.S. Women's Chess Championship. Double or triple-click on the screen to see the clip on YouTube full screen. Try to figure out who actually won and who moved out of turn. I certainly can't.

Thanks in no small part to this clip, chances are a national championship will never be decided in this way again. From Chicago's own Betsy Dynako.