Earlier this morning I spoke with Chicago Public Schools chess coordinator Tom Larson, who told me the CPS elementary school chess championship tournament will take place at King High School, 4445 South Drexel Ave., on March 10. Doors will open at 9:00; first round will start at 10:00. (Five rounds, I assume, if past is prologue.) A flyer with the details is forthcoming. When I get it I'll post it here and on the Ray School Chess Club Web site. This information often doesn't circulate as well as it should, so please tell any CPS chess coaches you know and anyone else who might be interested.

There's also information about the tournament on this thread at the ICA forum. If I get any additional information I will post it there.

Note to coaches: As you may know, there's a lot of paperwork to be prepared and submitted if you want to go to this tournament. If you haven't sent yours in yet, I'd suggest you call Tom Larson (773-553-3655; tlarson@cps.k12.il.us) or get in touch with your area sports manager, if you know who that is.

Writing from his perch in suburban New Jersey, ace blogger and chess Expert Michael Goeller of the The Kenilworthian proves time and again that he is among the big brains of American chess. Michael is partial to the Shenkian thesis that chess is not just a game, but a pillar of human culture that has been central to the march of civilization for a millennium and a half. Frequently, he rides the idea to interesting places. This week, in a post entitled “Chess and Evolutionary Theory,” he explores the parallels between the work of Charles Darwin and the development of chess ideas over the centuries. He’s got Kasparov in there, too.

The post defies easy summary, and there are so many money quotes I would be at pains to choose one to represent it. So I’ll just say that if you like big ideas—and who in Hyde Park doesn’t?—check it out.

This cute video clip is making the rounds on the Internet, so I thought you might enjoy it. (Hat tip: M.S.S., who sent it to me first) I guess a chess simul is just another form of multitasking, and the concept can be applied to any of life's activities—provided other people are willing to wait around for you!

It was a busy weekend for scholastic chess, particularly at East Side Middle School in Anderson, Ind., site of the 2007 U.S. Jr. Chess Congress, a national tournament in which Ray third grader Phillip Parker-Turner finished second in the eight-and-under category. The participants included about 200 kids, most of them very serious chess players, who came from twelve states to compete. Phillip has won countless trophies and tournaments before, but this, as I say, was a national tournament; this one is really something special.

Also, for the second year in a row, Phillip has been named a Warren Chess Scholar, an honor bestowed on Illinois students who are nationally ranked in chess. Congratulations, Phillip, on both accomplishments.

While the young kids were going at it in Indiana, the older ones were duking it out in Peoria, at the Illinois state high school championships. The title went to Maine South High School in Park Ridge, which upset Chicago's favorite sons and daughters, Whitney Young, in the final round. The Whitney Young Dolphins had beaten the reigning state champs, Niles North, in the previous round. As usual, the 64 Square Jungle has the goods.

If your kid wants to prepare for our upcoming tournaments (March 3 & 10), you have a new option, with a series of online chess classes starting this month from the indefatigable Sevan Muradian. Players of all strengths, including beginners, will find classes just for them in these hour-long group lessons taught by “some of the top chess talent across North America.”

The online chess classes will cover tactics, openings, the middle game, and the end game. At $20 each, the price is very reasonable. Sevan himself will teach some of the lessons. Other instructors will include recently minted Grandmaster Pascal Charbonneau, International Master Irina Krush, National Master Pete Karagianis, and a host of other IMs and GMs.

Some classes start this Sunday, so don’t delay. Go here for more information; you can sign up online.

Sevan, who is a veritable force of nature on the Illinois chess scene, has more accomplishments to his credit than we could possibly name. One of his latest initiatives is the North American Chess Association, the sponsor of this interesting plunge into Web-based chess teaching, as well as many other things, like the North Shore Scholastic Chess Tournaments, and, in partnership with Chess-Ed, the Kumbaya Chess Tournaments. We wish him well with this new series. Once upon a time, I was a New York City cabdriver, so I’m always keen to help dispel the pejorative stereotypes with which the practitioners of that august profession are unfairly saddled. Imagine my delight, then, to see this report about how my successors in the trade are perfecting their skills in the Royal Game. Chessbase.com has the goods.

Brad Rosen, also known by his online nom de plume Chessdad64, has put together a list of the Illinois junior chess players ranked among the top 100 nationally in their age groups, and in one of those rare harmonic convergences that occurs every so often in this vast and expanding universe of ours, the list comes to 64 kids, exactly the number of squares on a chess board. 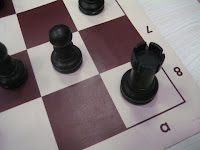 It’s not a large number, considering that we’re talking about the whole Land of Lincoln, which makes the kids in the group a special and talented bunch indeed. One of them, I’m proud to say, is Ray School’s Phillip Parker-Turner, who, with the release of the February standings from the U.S. Chess Federation, now ranks 40th among all eight-year-olds in the country.

Brad, whose site, The 64 Square Jungle, is the top chess blog in the Midwest and one of the most influential nationally, also takes the occasion of Chicago’s impending Super Bowl appearance to highlight the super adult chess talent in the area. They’re an impressive group, too, and include several grandmasters and international masters.

Yet along with the local boosterism Chessdad64 delivers an honest assessment of the problems and travails with which the local chess scene is plagued, and they are not inconsiderable. It’s an excellent post; everyone should read it. Go, Bears!