Chess in the Churchyard: Toronto 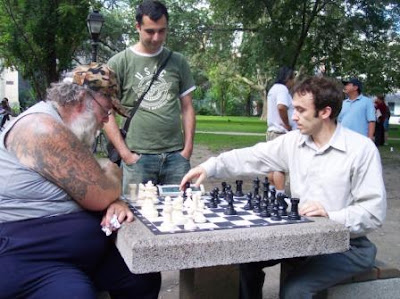 I can’t resist the bonhomie of street chess, so when I found myself in Toronto for the day last Thursday, I made sure to visit the one spot in town where I knew there to be a lively version of it generally in progress: the courtyard of the Metropolitan United Church, on Queen Street between Church and Bond. 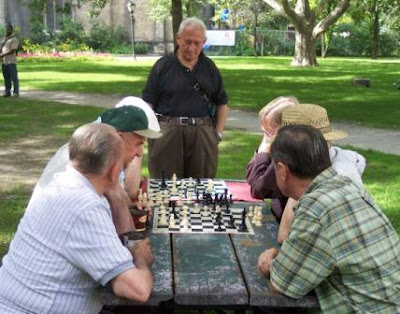 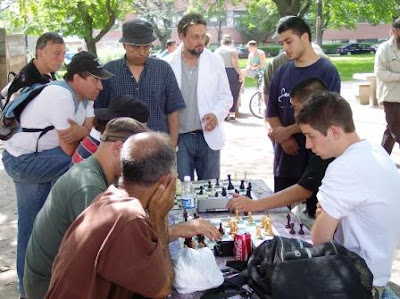 The churchyard has four chess tables located a piously appropriate distance from and building’s entrance. Still, if you enter the church from the front you can’t avoid walking past the chess boards.

From about 3:30 in the afternoon on there were five or six games going on at any time, the woodpushers having appropriated not just the chess tables proper but some of the assorted picnic tables that also dot the yard. The scene was mostly male and slightly raucous though perfectly friendly. Five-minute blitz appeared to be the game of choice, though some clock-free games were under way. No money changed hands at the table where I played (won 1, lost 2).

I also stopped by the incredible plaza at Yonge and Dundas to see the irrepressible chess entertainer Raul, who holds court on the corner. He charges five dollars a game (“a donation, not gambling”). I didn’t have time for that. Maybe next visit. Speaking of religion and chess: you probably wouldn't catch this scene at a mosque. Assuming Grand Ayatollah Sistani speaks for Muslim belief here.

Dude, love the pics! You have a good eye.