In a loss to Arizona, we learn that Angelo Young is even more amazing than we thought. 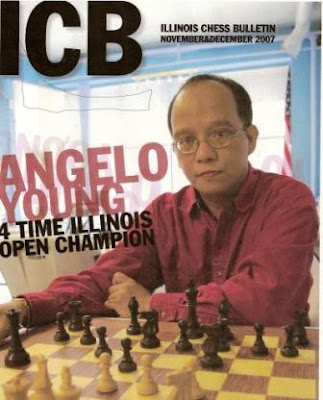 Okay, sure, we lost. To Arizona. For the fourth time in a row. And we’ve never beaten or even drawn them, it’s true. And yes, the loss puts our fading playoff hopes on life support.

If you’re predisposed to negativity, those might be your impressions from Monday night’s Blaze match against the Scorpions.

But the real news of the night was this:

IM Angelo Young, who we knew was amazing, is even more amazing than we imagined.

He wasn’t even scheduled to play last night, but when a teammate took sick Monday morning he rearranged his schedule and obligingly stepped in to play Board 1, with a huge time penalty (because of the last-minute substitution) against freshly qualified GM-elect Rogelio Barcenilla, whose rating exceeds Angelo's by 258 points.

It didn’t seem to bother Angelo, either, that he was putting his undefeated USCL record on the line under extremely difficult circumstances. And I think I know why: because somehow he must have known that he was going to win.

With no time for dinner, much less to prepare for the game, Angelo played fast, played great, double fianchettoed, won material, and won the game, all while wolfing down appetizers from Tandoor India to keep his blood sugar from crashing.

It was a great game and a superb achievement. It not only extends Angelo’s undefeated streak from the time the Blaze joined the league last year, but it gives him a shot at his second Upset of the Week prize of the season. He has now played every board for the Blaze at least once, and he’s never lost. Congratulations, Angelo, and thanks so much for pinch hitting on such short notice.

True, the rest of the night didn’t go so well for the Blaze. Here are the games:

As always, we must give special thanks to our Celebrity Tournament Director for the night, a role played ably and diligently for the second time this season by Mike Cardinale of the Youth Chess Foundation of Chicago.

Next week is Week 9, and we play the reigning champion Dallas Destiny on Monday night. We will have to win (not draw) to have any remaining playoff chances at all. Watch this space for more.
P.S. Though it has been expected for some time, a note of congratulations is in order for our very own Florin Felecan (the 2009 Illinois state co-champion, by the way), who has had his international master title formally approved by the the World Chess Federation. Henceforth, he is IM Felecan. Congratulations, Florin.