An organization called Chess-Ed is holding an all-girls tournament in Wilmette on Sunday, February 4. (Hat tip: Susan) It's part of the Kumbaya Scholastic Chess Tournaments series, the organizers of which include Alice Holt and Shiva Maharaj, both well-known in these parts for their work with Chicago Chess Kids. 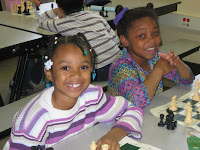 I'm happy to say that the Ray School Chess Club now has more girls than ever before, and I hope some of you will consider playing in this tournament. Besides, with a name like Kumbaya, how can you go wrong? Go here for details.

(Note: Although this is a USCF-rated event, for which you'll have to be a member to play, Alice informs me that they'll also have a non-rated section, so you'll be able to play even if you're not a member of the federation.)

Then, if you're really serious, you can enter the 4th Annual All-Girls Open National Championships, March 16-18 at the Palmer House.