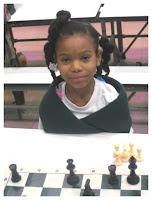 all other intermediates the Ray third grader automatically moves into the foundation’s heady advanced division, where some of the best scholastic chess players in Chicago reside. Phillip will be one of the youngest members of that elite club, which includes kids up to eighth grade.

Allen’s 4.0/5.0 is remarkable considering he’s a first grader and today’s tournament was only his second as an intermediate. In last month’s Burbank School meet, Allen’s 3.0/5.0 fell just short of trophy qualification, so today’s record was sweet vindication and an indication that he may be joining Phillip in the upper echelon soon.

There were other milestones as well. George Vassilatos’s 3.0/5.0 was his best tournament performance to date, and first grader 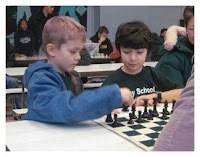 We’d be remiss not to mention that the team trophy for the beginner category went to our neighbors at the University of Chicago Laboratory School, impressive considering it was Lab's first YCFC tournament.

Next up: the March 3 tournament—at Ray!

Congrats Tom! I want to apologize; I had company Saturday and completely forgot about swinging by. I hope to come to the next one. I may swing by your club one of these Mondays with your permission to chat with you and see your club. Let me know; talk to you soon.

BTW, I see that you have incorporated the snap.com pop ups. I love that feature in my blog; I hope more people use this new technology from this company.

Thanks, Lamarr. I saw the previews on your site and got "Snap envy." :o)