NEW YORK CITY—Temperatures climbed into the upper 40s yesterday and brought players out in force to two notable outdoor chess spots in the Big Apple. Your humble blogger was there to witness the action. 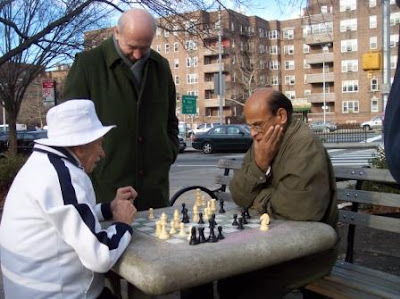 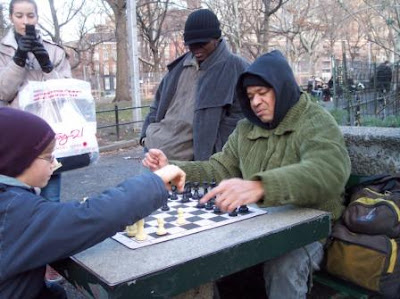 It’s a great day for Chicago. IM Greg Shahade, commissioner of the United States Chess League (USCL), has announced today on the league’s Web site that the Chicago Blaze will be one of two new expansion teams to join the league next season. Big league chess has come to Chicago at last.

The USCL is a organization of competitive professional chess teams from across the country that play matches during a ten-week season that runs from late August to late October and is then followed by playoffs and a championship. The league currently has twelve teams from New York and Boston to Seattle and San Francisco but until now no team from Chicago. It’s the equivalent of Major League Baseball for chess, a fact that the league’s logo makes no attempt to disguise.

The difference, of course, is that USCL players aren’t pampered and over-paid celebrities; they’re just strong chess players who represent their cities for a little bit of money and a lot of civic pride. Their accessibility will make the Blaze a great opportunity to promote chess generally in Chicago.

The Blaze is an initiative of the Illinois Chess Association, and thanks must go to ICA President Chris Merli for supporting the project, to ace blogger and chess dad Brad Rosen for proposing the arrangement, and to über-organizer Sevan Muradian for recruiting players and spearheading the discussions with the USCL that led to today’s announcement. There would be no Blaze without Sevan. Nor without Evanston chess mom and ICA activist Maret Thorpe, who came up with the team name, and chess mom Andi Rosen, whose ideas and outreach to players at crucial stages were, well . . . crucial.

I’m also proud and honored to be a part of the Blaze supporting cast (no, not as a player, heaven forbid), and I’m looking forward to working with all of these fine people to bring big-league chess to Chicago.

There’s more on Glenn’s blog, and Brad’s site will probably have something on it soon. There will be more in the weeks to come. Stay tuned.

It’s been around for barely a year, but in that time IM Angelo Young’s Touch Move Chess Center on North Ashland has become the gathering point for Chicago’s top chess players. Now the top junior players will gather there as well, when the center holds its first scholastic chess championship on Saturday, January 5.

The tournament is open to all scholastic players (K-8) with ratings of 500 or better. The entry fee is $30, and it’s limited to 28 players.

There will be five trophies awarded, along with chess clocks and chess books for the winners. It appears that this will be a monthly event, leading up to a finale at the end of the year. It looks like a lot of fun, so I’d urge qualified players to come and play.

You can mail in a check or sign up online. Details here.

Play at McCormick Place next weekend

The very first post on this blog was about several Ray School kids who became Chicago Public School Chess All Stars by playing at the Mayor’s 2006 Holiday Sports Festival, held last year between Christmas and New Year’s. Well, here we are a year and

This year’s festival will again be held at McCormick Place, next weekend, December 28-30, from 10 AM to 4 PM.

If you’re one of those people who’s interested in things besides chess, you’ll find plenty to do. I couldn’t make it last year, and alas will have to miss it again this year, but I’ve heard it’s a lot of fun for both kids and adults, so if you’re looking for something fun to do next weekend, I encourage you to check it out. It’s free.

Details on the festival here; details on the chess tournament here. Call Renaissance Knights, organizers of the chess events, if you have any questions.

Could Be Worse, I Suppose

55%How Addicted to Blogging Are You?

Not bad, compared to some people, inluding one to who I owe a tip of the hat for directing me to this survey. Oy.

P.S. While you're at Boylston, check out their latest caption challenge. Where does he find these things?

Sonam Ford took first place against a hundred other players on Saturday to give Ray School its second consecutive personal victory at a major citywide tournament. 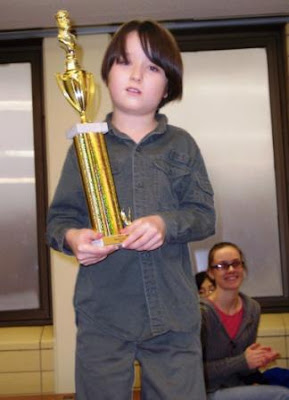 By winning the Advanced section of the Youth Chess Foundation of Chicago’s meet at Gill Park, Sonam became the tournament’s overall champion, following in the footsteps of teammate Phillip Parker-Turner, who won the same honor a month ago at the YCFC’s previous meet. 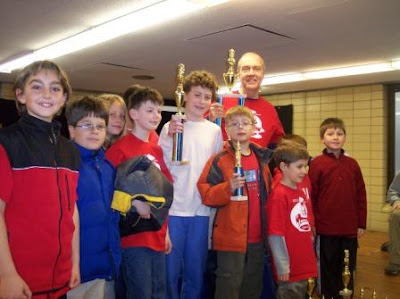 However, just as Phillip suffered his only defeat of that day at the hands of Christopher Velazquez, Sonam also lost his fifth-round game on time to the Burbank Elementary School star after going 4.0/4 up to that point.

Ryan Toepfer of Decatur Classical School won the Intermediate division, and the Beginner’s section went to Ethan May of Bell. Both kids were playing in their first YCFC tournament. Ray second grader Allen Dai also won a trophy in the Intermediate section. Kenyon Edmond and Gonzalo Higuero represented the school in the Beginners group.

For the team trophy, which goes to the school with the top beginner’s section, it was a real donnybrook, only a few points separating the top four teams. Victory went to Bell Elementary, led by Coach Jim Altenbach, which was playing in its first YCFC tournament in several years. Bell inched out Burbank by a point, with Clinton and Disney close behind. 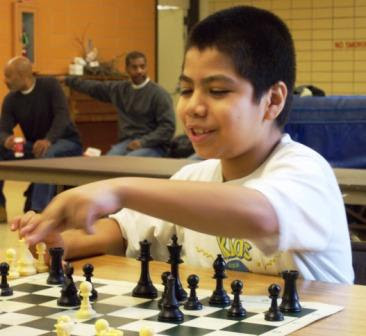 The foundation’s network is growing rapidly. Decatur and Darwin were the new arrivals at this tournament, and they followed closely on the heels of Fulton, Clinton, and Cook, which joined the league earlier this year. 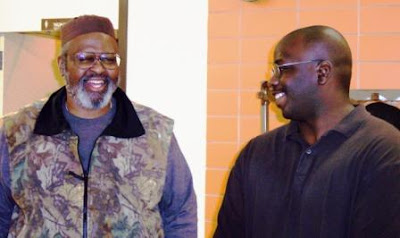 Congratulations to the YCFC’s Mike Cardinale, John Lee, Saadiq Sajjaad, and their legions of volunteer helpers, for an excellent event. Next tournament: January 19 at Burbank Elementary School. Details to come.

It isn’t every day that an American chess player wins a major international title, but today is one of those days. Brooklyn-based Grandmaster Gata Kamsky, possibly the strongest player in the U.S., has just won the World Cup, beating GM 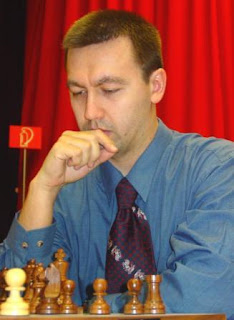 Alex Shirov in the final round, in the Siberian town of Khanty-Mansiysk.

Kamsky defected to the U.S. from the Soviet Union in 1989. A few years later he dropped out of chess entirely to go to school, eventually completing a law degree. He returned to chess a few years ago, and many observers say he has returned to top playing form. His World Cup victory over a field with some of the top grandmasters in the world would seem to confirm that.

I don’t know much else about Kamsky, other than the fact that he and GM Nigel Short sometimes still quarrel over the events at a match they played in the ‘nineties in which Kamsky’s father apparently harassed Short.

More on the World Cup from Jennifer Shahade at the USCF site and at Chessbase. Kamsky’s bio here.

Looks like big doings next January 11 out in Barrington, home base of local GM Yury Shulman. Former World Champion Anatoly Karpov will be there, along with some other superstars, and someone, at least, is playing a simul to which the public is invited to enroll. I saw this on Susan Polgar's blog: 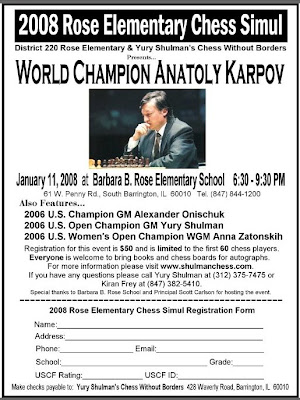 It's not entirely clear to me who's playing whom, but you can see a bigger copy of the flyer here, and there's more information at Yury's Web site.

CPS Lays Down the Rules

For any chess coaches who couldn’t make it to last week’s meetings of the Chicago Public Schools, here is the document they gave out. (I wasn’t there myself, so I owe a tip of the hat to Ray School’s PE teacher and sports coordinator, Ms. Perez, who kindly picked up a copy for me.) 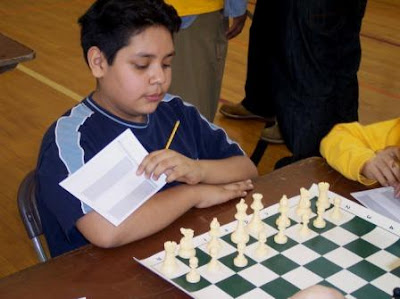 Notice that there are a number of requirements they say you have to meet, and those requirements are cast in fairly inflexible language: failure to meet them “could” result in your kids being banned from the city championship. Whether or not they will enforce this, I don’t know; they have generally not done so in the past, at least not consistently, though I understand Whitney Young High School was prevented from playing in a major event last year for lack of one document.

Let me call a few things to your attention:

One clarification: The copy of the document I received was a third- or fourth-generation photocopy that I scanned and cleaned up a bit to produce the one I’ve posted here online. It may not look exactly like the original CPS piece, though the text should be the same.

Kids, take note: Just because you make mistakes, it doesn’t mean you lose. I made plenty of blunders and weak moves in this online blitz game (like not playing 11. Bxb7 - ?), but my opponent made more of them.

To err is human, so whenever you’re playing one you can expect some errors. When you make one yourself, just take a deep breath, move on, and wait for your adversary to make the next one. (Oh, yes, and don’t make any more of them yourself.)

Comments on the game welcome, though please don’t be too unkind.

This thing (I don't know what else to call it) is supposed to improve your board vision. That is, if it doesn't make you dizzy first. If you have the patience, imagine a chess piece in the (moving) central white square. Red=rook movements; blue=bishops; yellow=knights. I think.

Actually, the first time I saw it I thought it was a flattened-out Rubik's Cube. (People of a certain age will remember what that was.)

The item shown here was created by a guy named Tom Brown, and you can go here for more.

Yes, it's a gimmick, and I'm using it to grab your attention. Give me a break; I have to do something to compete with BCC.

The tournament room at the Hyde Park Neighborhood Club was jammed yesterday, as about 85 kids from all over town came to play in the second chess tournament of the year by Chess Education Partners. 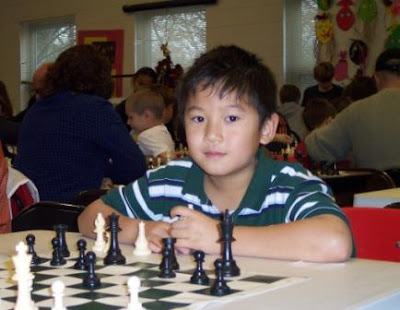 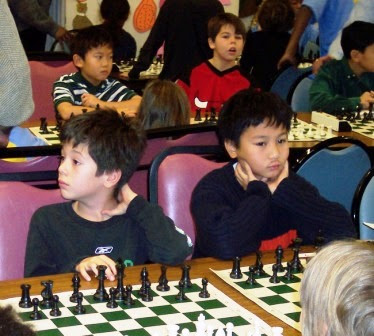 That’s up from 48 players a month earlier and about half that at the first CEP tournament in the neighborhood last June. It looks like the world has discovered this excellent series of chess meets and is beating a path to Hyde Park.

The funny thing is, not many Ray School kids are coming. Allen Dai, Phillip Parker-Turner, and Andy Margulis were the sole Castle Kimbark standard bearers this time. Allen finished second in a field of 13 in the Grades 2-3 division, and Phillip took third place out of 24 players in Grades 4-5. I assume they both got trophies, though, alas, I couldn’t be there for the ceremony at the end. For the same reason I don’t know which schools won the various team competitions. Sorry. The offical crosstable is here. 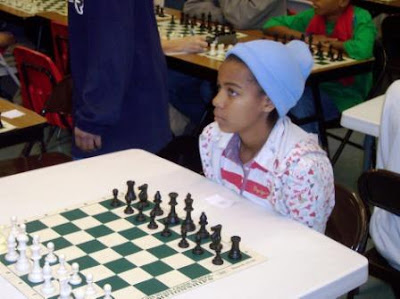 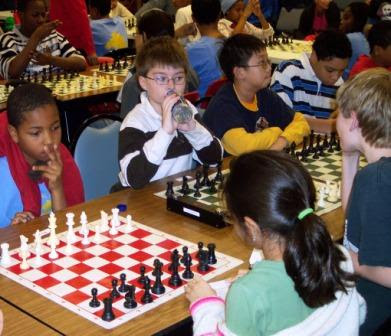