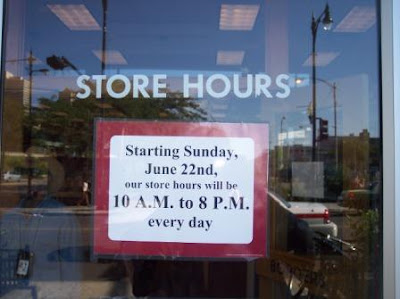 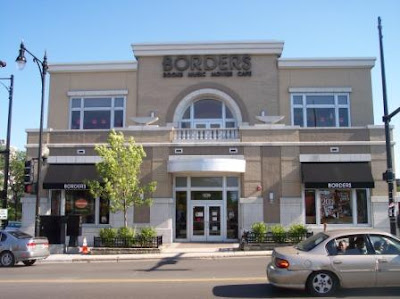 The Borders bookstore on 53rd Street and Lake Park Ave., where Hyde Park chess players have found perhaps their warmest welcome since being unceremoniously ousted from Harper Court several years ago, has cut back its daily hours of operation, now closing every evening at 8:00. The store was previously open until 10:00 on weeknights and 11:00 on weekends.

The reason for the new hours wasn’t immediately clear, though there have been reports in the Chicago media that certain Borders stores, including the one in Hyde Park, might be slated for eventual closing as a result of a shift in the company’s corporate strategy. I have no recent information on this or whether the change of hours indicates anything about the store's eventual fate.
The new schedule does mean, however, that chess players, who play continuously in their cozy perch on the east end of the store’s second-floor café, will have their evening games cut short. The store has given refuge to a group of itinerant chess players who have been part of the Hyde Park scene for many years. Though they are mostly adult men, some star members of the Ray School Chess Club, including Phillip Parker-Turner and Sonam Ford, play there regulary.

In other developments, the storefront on 53rd between Greenwood and Ellis that was home to the former Hayden Market, which once provided a haven for chess players, is now empty. The establishment was taken over last year by new proprietors who immediately put an end to chess at the store. What exactly happened is a matter of some dispute, but if the new management thought that banishing chess was its key to success, they appear to have miscalculated.

Elsewhere, I have seen no chess at all this season outside the Starbucks on 53rd and Harper, where players gathered regularly in previous years, though the royal game is being played vigorously, weather permitting, at the two chess tables in Harold Washington Park, 53rd Street and Hyde Park Boulevard.

One reason I'm thinking is that they are the only establishment I know of open that late (Valoi's closes at 10pm). I don't think there is a market for "paying customers" buying books that late so they may be losing money during those last 3 hours.

My other thought was safety. Employees and patrons going home that late have increasing been in more danger thanks to all of the recent violence in Hyde Park and Kenwood from robberies to shootings. I wouldn't want to be walking home at 11pm in Hyde Park; it's not as safe as it used to be.