No sooner does the Hyde Park Neighborhood Club start a chess class for kids than we find out veteran trainer and chess impresario Wayne Smith plans some courses of his own. One class will begin next Saturday at the Kennicott Park field house at 44th and Lake Park Ave. The price is $85.00 for ten weekly sessions, and there'll be beginner, intermediate 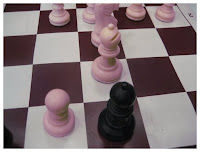 , and advanced sections. The other class, which will meet after school, will start in February. Contact Wayne at 312-217-9062 or wsmith@hydeparkchessacademy.com.

Wayne has worked as a chess trainer in schools all over Chicago, including Murray Academy, Ancona, and U of C Lab. His aim is to prepare kids for competitive chess, and as far as I can tell his reputation for succeeding is excellent. Two years ago a Ray student enrolled in Wayne’s six-week summer chess camp and enjoyed it so much he signed up for an additional three weeks.

Chess Notes from Hither & Yon: It’s true, as they say, that you really can play chess anywhere, and it’s nice to know that even if you’re traveling in Alaska you can probably find a game.