Its storefront home on North Ashland Avenue is small and nondescript, but from the moment it opened six months ago, the Touch Move Chess Center gave Chicago something it hadn’t had for a long time: a chess club that’s

open more than one day a week.

Touch Move is the brainchild of International Master Angelo Young, and its mission, he says, is to “revitalize the chess club scene in Chicago through club tournaments, scholastic and adult training sessions, hosting small international chess tournaments . . . and providing a quality environment for chess socialization through friendly play.”

And he adds, “The Touch Move Chess Center cares about bringing chess to everyone and most importantly making chess fun!”

Almost immediately after it opened the center became a mecca for the top players in town. (A nice article in the Chicago News-Star certainly didn't hurt. Hat tip: Lamarr) A casual glance at recent crosstables reveals that habitues include masters Albert Chow and Aleksandar Stamnov and expert Isaac Braswell.
Sevan Muradian of the North American Chess Association—he’s Mr. FIDE in this neck of the woods—has made Touch Move the venue of choice for international tournaments of IMs, GMs, and those seeking to earn norms for those titles. 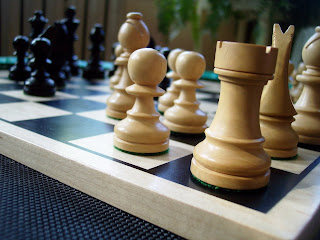 Fine for the masters, experts, and Class A players, you say, but what about us patzers?
As it turns out there’s a place at the table for us, too. The center is hosting a series of tournaments on Saturdays—June 2, 9, and 16—with a “U1400” section—for players whose chess rating is under 1400. Angelo is also interested in holding chess lectures if there’s enough interest, so if you are interested in lectures, please let him know.
For details on the upcoming tournaments go to the center’s Web site or the Illinois Chess Association calendar.
New York has the Marshall, San Francisco the Mechanics Institute, and Boston the Boylston Chess Club. Can the Touch Move Chess Center grow to take its place in this pantheon of great urban chess clubs? Here’s wishing it the best.