Ever since Ron Weasley’s self-propelled queen clobbered Harry’s knight in Harry Potter and the Sorcerer’s Stone, the bond between chess and J.K. Rowling’s epic series has been unbreakable. After all, was it not their chess skills, in the end, that enabled Harry, Hermione, and Ron to reach the Stone and save the day? 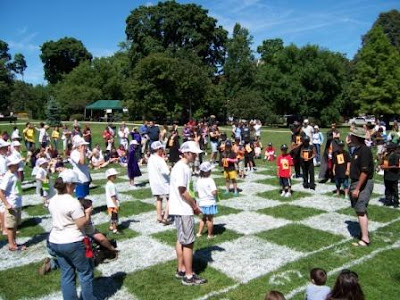 Given the connection, then, it was natural for chess to be included in last Friday’s Harry Potter festival in Oak Park, a celebration of the seventh and final volume in the series. Included it was, and in a big way: a live chess game in which the pieces were played by real people who moved around the board at the direction of the players.

The players in this case were Forest Park Mayor Anthony Calderone and Oak Park Village President David Pope, who joined forces in a friendly exhibition game against International Master Stan Smiatankin. As they played, the costumed kids and adults acted out the moves for the assembled crowd on a big board stenciled onto the grass. In pooling their chess talents against the formidable IM, our West Suburban noblemen were as the Duke of Brunswick and Count Isouard to Stan’s Paul Morphy. It was a courageous act for the mayors to take him on, but alas, like that famous game in Paris almost 150 years ago, victory again went to the lone master. 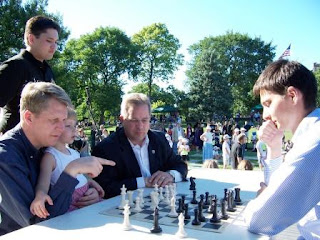 Fortunately, the politicians were politic about the results. “They were good sports,” said National Master William Aramil, who served as commentator for the event. “Neither used their influence with the local police to have Stan removed from park.” Nor did the Duke and the Count have Morphy clapped in irons and dragged off to the Bastille. Chess people are civilized, right? “Win with grace, lose with dignity,” as Susan is always reminding us.

And speaking of Susan Polgar, her chess über-blog covered the event, giving it national exposure. (Not that our humble weblog is chopped liver, mind you.) Sun-Times columnist Neil Steinberg was on hand as well.

Normal-size chess was available at a nearby tent for those not playing pieces in the main event. The whole thing was organized by the Renaissance Knights Foundation. More photos here.

Tom,
Nice job! Thank you, for taking your time to write this & for giving special attention to the people who participate in these events.
Hope to see you soon,
Sheila
www.RKNIGHTS.org