Chess on the Lakefront

Yesterday was the kind of beautiful and comfortable day you seldom get in late July, so I took advantage of it and headed up to the chess pavilion at North Avenue and the lakefront. 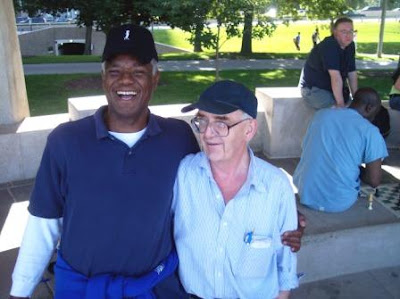 Ron Washington and Walter Sowa
It's a lovely spot, and the place is an institution among Chicago chess players. According to a nearby plaque, the semi-enclosed, space-age structure was built in 1957 in response to the popularity of the location among chess players back then. That makes this year the pavilion’s jubilee, and in my humble opinion 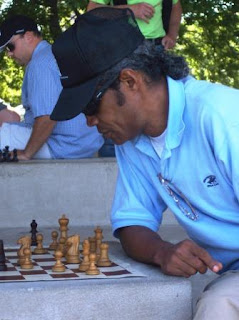 it wouldn’t be a bad idea for the Park District to mark the occasion by fixing it up a bit. It’s in considerable disrepair: several of the 22 outdoor chess boards are crumbling and unusable, the lights often don’t work at night, and the place just needs some work.

Apart from the lighting, however, these problems seem to matter little to the regular denizens of the place, who flock to it throughout the summer, especially on weekends. While I was there yesterday there were about six or seven games in progress at any given time, and the regulars said attendance was down because of a tournament at Tuley Park. (One person conspicuous in his absence was Master Aleksandar Stamnov, who was believed to be at the South Side meet.)

I got together for awhile with chess Expert Ron Washington, whom Chessdad64 describes as the “mayor” of the chess pavilion. Ray School parents may remember Ron for the simul he played with club members at our chess picnic last fall. After beating me a couple of times he gave me some valuable lessons (at a very reasonable price) on the ideas behind the Giuoco Piano and the Fried Liver Attack. 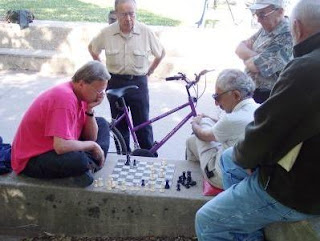 Next Walter Sowa showed up with the move history of a recent game from the World Open in which Ron and Walter’s mutual friend IM Emory Tate beat IM Salvijus Bercys. It was a brilliant game, and it was a treat for me to watch these two veteran players review it. Go to The Chess Drum to play through the game and read the analysis by Tate, who is well-known for his chess annotations.

As the Ray School chess blog goes, so goes the Chicago Reader.