A current and former Ray School chess star were reunited last Sunday in Northbrook, Ill., after a two-year separation, and the magic was still there from the days they both competed for dear old Ray.

Ray fifth-grader-to-be Phillip Parker-Turner, a leader on the local scholastic chess circuit, found himself in the same tournament with his old teammate Marco Codenotti, who, in the two years he’s been back in his native Italy, has made a name for himself in chess tournaments all over the Continent and even Dubai. Marco is spending the summer in Chicago. 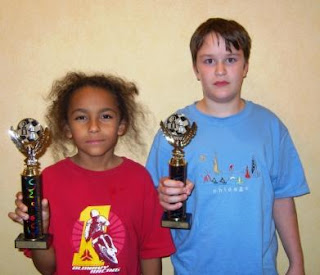 Phillip and Marco with the tokens of victory

Both kids added to their formidable reputations on Sunday by finishing second in their respective divisions in the Knights Quest Tournament sponsored by the Renaissance Knights Foundation. Marco got a trophy as the runner up in the Open division, while Phillip did the same in the U1200 group.