Sightings of Elvis have doubtless been on the rise this week, it being the thirtieth anniversary of his putative death, but The King isn’t the only one being spotted in unexpected places. Marco Codenotti, the former Ray School chess star who returned to his native Italy two years ago, has been seen in Chicago, where he is spending the summer. He is of course active in chess, training with local GM Dmitry Gurevich and playing in the odd tournament, most recently the August 12 Third Coast Challenge by Renaissance Knights in Northbrook. 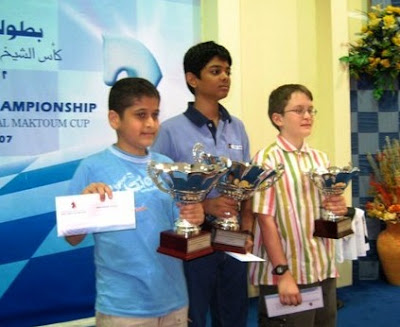 Marco with his co-winners in Dubai
Marco, you may recall, made headlines in the chess world a few months ago when he beat an International Master in a tournament on the island of Elba. Since then he’s been quite the globetrotter. His father reports that he played in a major international youth tournament in Dubai, finishing first in the U10 division and second in the tournament overall. He finished right behind FM (FIDE Master) Srinath Narayanan of India and ahead of another FM, Ulvi Bajarani of Azerbajian, who came in third. Meanwhile, the Italian blogger Mida, himself a FIDE Master, spotted Marco playing in a major tournament in Bergamo. Marco’s World Chess Federation rating is now 1969. Not bad for a ten-year-old.

Speaking of last Sunday’s Third Coast tournament, congratulations to Chicago FM Aleksandar Stamnov for winning it, which he did against stiff competition, including the remarkable Brian Luo of Wisconsin, who’s about Marco’s age and rated over 2000 USCF; and Indiana IM Emory Tate, about whom we have discoursed before.