Some of the most important people in Illinois chess, the movers and shakers who really make things go, got together Sunday afternoon for the annual Illinois Chess Association banquet.

I was there, too, since you didn’t have to be important to attend, just pay your twenty bucks and be a member of ICA. They didn’t even ask my rating, thank goodness. 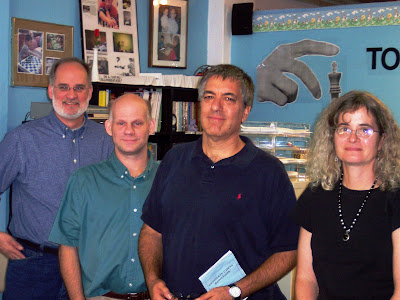 Over great Middle Eastern food we talked chess and played chess. After lunch and conversation Illinois state champion Angelo Young held a “simul”—a simultaneous exhibition, in which he played everyone at once. Despite the generally high caliber of the talent on hand—I counted no fewer than four expert-rated players in the group—Angelo, an International Master, beat almost everybody easily. Only Sevan Muradian got a draw. 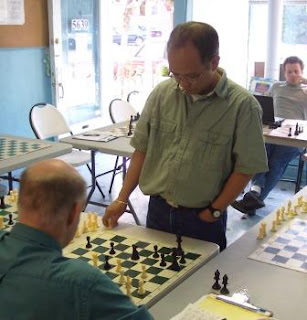 It was my first ICA banquet, and I had a great time. The organization seems to be in the hands of smart and committed people. (Sane ones, too, which is no mean feat in the chess world.) Thanks to Angelo (and his mom) not only for his dazzling play but for hosting the event at his Touch Move Chess Center; to Sevan, ICA webmaster and owner of the North American Chess Association, who organized it; and to the guys from downstate who drove long distances to attend. 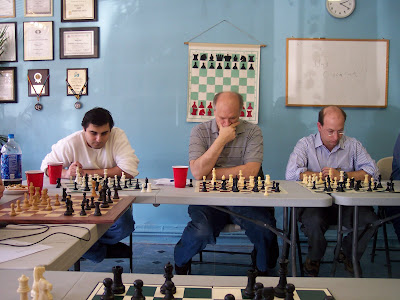 Sevan Muradian, Bill Brock, and Glenn Panner ponder their positions during the simul