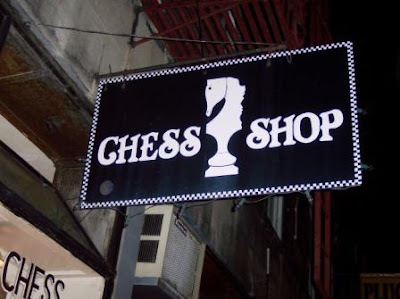 Have you ever been to a chess shop, a place where you not only buy chess equipment, but actually see it, fondle it, and make sure it’s what you want before you pay for it? Where you can frolic amid shelves, even aisles, of gorgeous chess sets, admiring the ones you could never afford, and drooling a bit perhaps before moving on? Where the proprietor actually plays chess, knows the game, and will kibitz with you whether you buy anything or not?

If you live in Chicago, you may never have set foot in such a place, for there isn’t a single chess shop in the city. There are more chess shops on one block of Greenwich Village, in fact, than in all of Cook County, Illinois. As far as I know, the only chess store in our entire area is out in Elmhurst; Thompson Street between 3rd and Bleecker in New York has twice that many.

But for how long? According to the New York Observer, the neighboring Village Chess Shop and Chess Forum, mainstays of the city’s chess scene for years, as much for their perpetual feud as for the equipment they supply to local woodpushers, are struggling to survive. 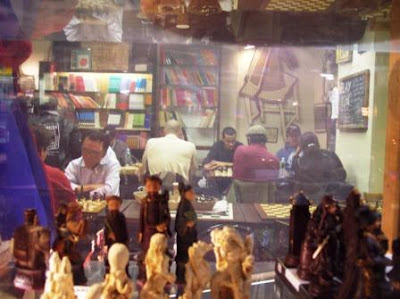 “We are en route to vanishing,” said Chess Forum’s Imad Khachan, and the reason is simple: the Internet. With chess supplies as for other commodities, online retailers enjoy low overhead and can sell for less. The last time I was in the Village Chess Shop, a regular set of plastic tournament pieces cost about twice what it cost at Wholesalechess.com.

So once again we face the question of what the Internet is doing to chess, and is it good or is it bad or is it some of both? The Internet adds efficiency to commerce, lifts out costs, and reduces prices. All good. But something is lost. The kind of culture that thrives around the commerce of Thompson Street, the Shakespeare talk and all the rest, is a stranger to electronic commerce. Nu?

Where besides the Village do bricks-and-mortar chess stores survive? There’s the American Chess Store in Austin and Your Move in Massapequa. Where else?

Hmmm, I think I've not seen a dedicated shop before. The closest thing was in Miami, but that seemed more focused on the club part than having to make a profit with equipment.

The decline in OTB chess is sad, but there seems to be enough people so that it won't disappear.

Seriously? There are no chess shops in Chicago? Where should I go to buy chess stuff?

To the best of my knowledge the only chess store in the Chicago area is It's Good to Be King in Elmhurst. I'd be delighted to learn that I'm wrong about this from someone who knows of another store.

Most people today, I think, buy their equipment online because it's much cheaper; online vendors have lower overhead. My favorite is WholesaleChess.com.

Like everything, internet killed most "real" shops, I'm not so astonished, particularly for chess.