HISTORY: IT SMACKS YOU RIGHT IN THE FACE when you walk into the Marshall Chess Club. The Greenwich Village institution has more than 90 years of it, and its proprietors show it off proudly and conspicuously everywhere, with pictures and memorabilia. And I don’t blame them: If Fischer and Capablanca had been to my house, I’d hang their pictures in my living room, too.

Well, maybe not Fischer’s, but let’s not get into that. The point is that the club, housed in a West 10th Street brownstone once home to Frank Marshall, the dominant American chess player of the early 20th century, conveys to its visitors an immediate and pleasant sense of awe—fortunately, without the shock. 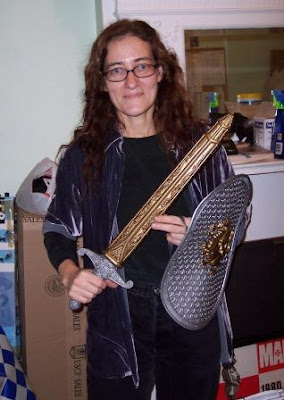 I got there around dinnertime on the Saturday between Christmas and New Year’s. Although the place was nearly empty, I did get to see two prominent chess celebrities. The first was Riley Kellogg, the club’s manager, who greeted me at the office when I went to sign the guest book. Riley wears many hats in the chess world. Besides managing the club and directing many of its events, she’s a prolific editor and a prominent chess literata; she even had a show on ChessFM radio awhile back.

Riley explained the routine, gave me some scuttlebutt on the club, and even let me see two of its sacred relics: the talismanic toy sword and shield belonging to IM Jay Bonin, which are believed to have brought luck to the New York Knights of the U.S. Chess League, the team that plays its games at the Marshall. (Backstory from Paul Hoffman, Jennifer Shahade, and Elizabeth Vicary. Of course, with the Chicago Blaze now in the picture, the Knights will need more than plastic armor if they hope to win this year.)

As I say, it was dinnertime and the place was pretty quiet. Some kids were playing chess downstairs; a woman sat alone at a chess board in the front room purposefully reviewing a game with her MonRoi. There was only one adult chess game in progress, a postmortem (or maybe a lesson) in the back room, but one of the players was none other than Asa Hoffman, the well-known FIDE Master who for decades has been a mainstay of the Marshall and the New York chess scene. 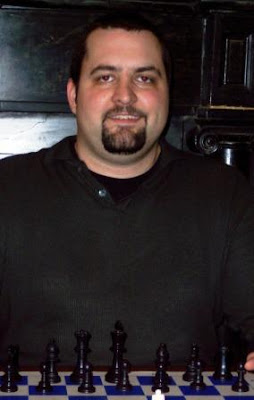 Eric checks out his new club

I also got to meet a delightful chap named Eric, who had just gotten a club membership as a birthday present from his wife and was breaking it in. It was his first day at the Marshall, as it was for me. He would be back, however, and I wouldn’t. I was jealous.

History abounds at the Marshall

I'm curious as to know who the woman was looking at her game on the Mon Roi. I thought I was the only female Mon Roi user at the Marshall. It sure wasn't me since I was not around.

I'm glad you enjoyed your visit to the club. It's great place to play, and I feel very fortunate to be able to get there almost every week for a tournament.