Chess on the Boulevard

For the second time this summer The Chicago Reader has published a substantial article on the local chess scene. First it was Ted Cox’s excellent piece on the North Avenue Chess Pavilion, and now, in this week’s issue, Gus Garcia-Roberts trains his spotlight on Cecil Locke, proprietor of the portable “Touch & Go” chess tables on Michigan Avenue. 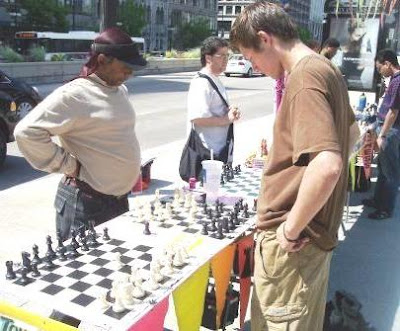 You may have seen Mr. Locke and his rickety tables at the corner of Monroe and Michigan, though not lately because, as the article reports, the City Council “clamped down” on street performers in that area last winter. Mr. Locke and his chess tables have been exiled to the southeast corner of Michigan and Jackson, where they can be found today. Fortunately, he says, business is good in the new location.

As one who has played on Mr. Locke’s boards many times, I think what he has done is simply ingenious. It’s hard to get people to go out of their way for chess, but bring it to them—set it up anywhere there’s a crowd—and you’ll always find a few who will step up and play strangers. It never fails. Mr. Locke's enterprise trades brilliantly on that recently coined aphorism, “Chess is like ginger ale. No one thinks about bringing it, but people love it when someone remembers it.” (Hat tip: Boylston)

You’ll find players of all strengths at Touch and Go. Here’s an exciting game in which an unknown opponent played Life Master Len Weber to a draw with the Queen’s Gambit Accepted:

“Good old fashioned street chess,” Len called it. “The game is flawed, gritty, like Chicago itself.” The game was originally published in the Illinois Chess Bulletin. To get the newsletter, with many other annotated games by local masters as well as chess news from Chicago and around the state, join the Illinois Chess Association.