There are changes afoot at IM Angelo Young’s Touch Move Chess Center. For those of you looking to improve your game, the newly re-crowned state champion is now giving chess lectures on Tuesdays and Wednesdays. 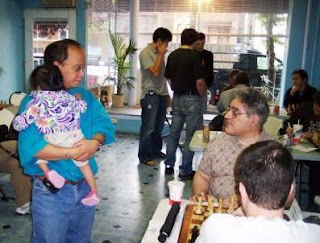 This week’s talks were on sacrifices, the middle game, and what Angelo terms the “5 elements of chess.” If you missed them, there’s another tactics lecture next Tuesday, and on Wednesday Angelo will expostulate on the end game, where you know you need work. (The last time you blew a king-and-pawn finale you swore you’d study endgames, right? Well, now’s your chance.)

Thursday nights the focus is on opening themes. It’s the Sicilian tomorrow night if you see this in time and the Queen’s Gambit next week.

Last but not least, Friday nights they play Fischer Random Chess, also known as Chess 960 for the number of possible starting positions. The game was invented by Bobby Fischer, and while the former world champ may be meshugenah, he’s still pretty smart, and some years ago he developed a chess variant in which the pieces in the back rank are scrambled, an innovation that forces players to be creative and renders memorization of opening sequences moot.

Go here for more information on Fischer Random Chess. For details about what’s going on at Touch Move go to the Web site or the ICA calendar.