Chicago and the Siege of Miami

Next week’s Miami Open promises to be one of the biggest national chess tournaments of the year, and besides Shabalov, Nakamura, and the other usual suspects, Chicago’s very own FM Aleksandar Stamnov and Expert Ron Washington will be there as well. They’re our guys, so let’s all root for them. Internet access permitting, we may even get some reports from them at the scene.

Are any other Illinois players going to the tournament? 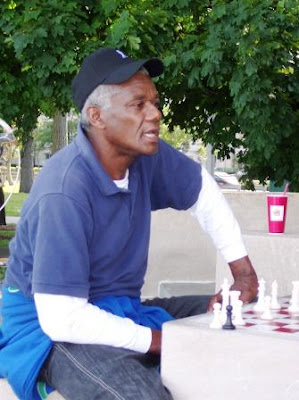 Notes from Blogistan
Glenn Panner has a blog. This is good news for chess in the Chicago area, so now that he’s online, everybody please go there, leave comments, and give Glenn encouragement to blog often.

Glenn has a great deal to offer the chess conversation in this area. He’s an Expert (rating > 2000), a National Tournament Director, and he’s been active in chess in the South Suburbs and all across the state for decades. He also sponsors many chess events and organizations.

I met Glenn for the first time only recently, during last month’s Billy Colias memorial tournament, of which he was the director, but his reputation had preceded him. The respect he enjoys in the local chess community is considerable. The Illinois Chess Bulletin, the excellent house organ of the Illinois Chess Association, calls Glenn ”Solomonic.”

Glenn is not the only local chess blogger, thank goodness. If you want a global perspective on chess, Sevan Muradian provides one at the North American Chess Association, reporting on news from all over the world. . . . Vince Hart continues to blog about his chess adventures, though to his credit he is not seized with the need to feed the bloggish maw incessantly or even every month, for that matter. He just posts when he has something to say. What a concept! . . . Chess mom Cheryl doesn’t write only about chess, but since her son Trevor Magness is a strong player (he recently reached Expert status at the Illinois Open), chess is a frequent theme at her blog A Round Unvarnish’d Tale.

For all of this information I owe a big tip of my hat to Chessdad64, from whom I know about Glenn, Vince, Cheryl and so many other people on the chess scene. For years he has published the Midwest’s leading chess blog, the 64 Square Jungle, though it’s been quiet of late while he explores other channels of expression, even as he remains active in local chess. Likewise, Lamarr Wilson’s excellent but short-lived Chess4Chicago.com is alas no more.

I think you just mention my name because you know I track its use via RSS. lol! Anyway, I am always following your blog, and thanks for posting about the others; I may check them out.

Neither played in Miami...