Chess Straight Up & the Longest Game 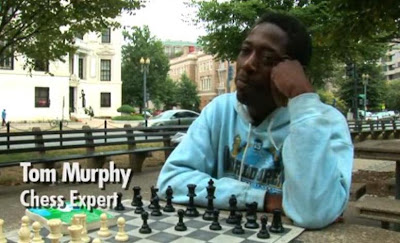 So sue me: I'm a sucker for street chess. This video from the Washington Post featuring chess expert Tom Murphy takes place at Washington, D.C.'s Dupont Circle, but it could have been Hyde Park, the North Avenue Chess Pavilion, Washington Square Park in New York, or any one of hundreds of places around the country where blitz is played fast and sharp and loud. . . . Question of the week: Where have all the chess clubs gone? Glenn Panner wants to know. . . . Did you know that there's a league of professional chess teams in the United States and Chicago is not a part of it? No, I'm not happy about it, either, but I mention it because this week Robert Hess of the New York Knights and Mikhail Zlotnikov of the New Jersey Knockouts played one of the longest chess games you'll ever see, a 114-move draw. If you've got some time to kill, get a cool drink, pull up a chair, and watch: