How many Ray School students does it take to change a light bulb? I don’t know, but it only takes two to win a team trophy in a major citywide chess tournament. That’s what happened today in the first tournament of the year at the Hyde Park Neighborhood Club put on by Chess Education Partners.

Despite the surprisingly low turnout from Ray for a tournament in our own front yard, fifth-grader Andy Margulis and fourth-grader Phillip Parker-Turner combined to give our school a first-place finish in the Grades 4-5 team competition. Fresh from his triumph dowstate yesterday, Noah Weeks-Brittan of the Chicago Latin School finished first in the individual competition in that division. 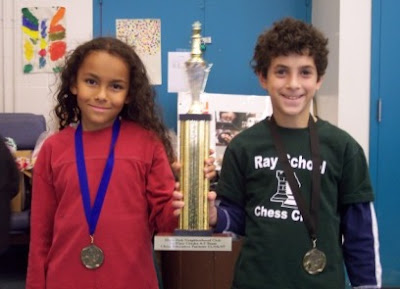 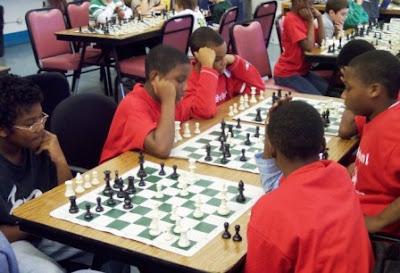 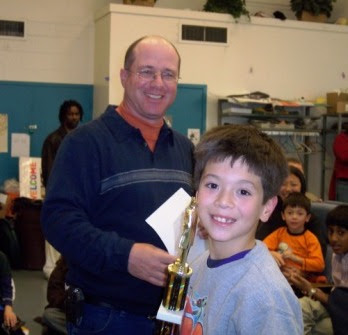 More pictures here. Thanks to the efficiency of Tournament Director IM Jan Vander Mortel, the individual results are already available from the U.S. Chess Federation here. Here are the team results for the event, which drew almost 50 kids from around the city and suburbs.

And afterwards, they played Bughouse:

Thanks to Jan, Chess Education Partners President Zack Fishman, and Peter Cassel of the Neighborhood Club. Next tournament in Hyde Park: December 2.

Great coverage Tom; thanks! Had I known about it I would have stopped by. I haven't seen the kids from Cook school in a while; I used to host them when I was at Joplin. It's great to see them still involved as chess is kind of isolated in their area.

As always, congrats to your Ray kids!

You're so right, Lamar. Chess is kind of isolated in our area. It's pretty lonely over here. We miss you! The Hyde Park tournament was our first this year and my kids had a ball. I am trying to get the e-mail of Mike Cardinale so I can register our team for the meet at Disney next weekend. If anyone can help, please send to my e-mail: wewawo@comcast.net
Thanks,
Melaniece