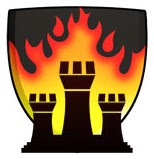 In one of the first steps toward making the Chicago Blaze a full part of the U.S. Chess League, Commissioner Greg Shahade today unveiled the team’s new logo on the league’s Web site. I think it’s gorgeous. The logo was created by Michael LeGrand and Dan Halka under Greg’s direction and with a lot of input from Blaze people here in Chicago. Many thanks for a great job. As the USCL site explains, the emblem represents the Great Chicago Fire of 1871 and the surviving Water Tower on North Michigan Ave., whose structure conveniently happens to suggest a bunch of chess rooks.

The Chicago Blaze will be a new expansion team in the USCL, a league of professional chess teams from around the country. Until now the league has had no Chicago team, but the area’s top players have rallied around the Blaze and should make it a contender from day one. Details here and here, and stay tuned for more Blaze developments in the weeks and months ahead.

By the way, in case you hadn’t heard, Mrs. O’Leary’s cow has been all but totally exonerated and cleared of any culpability in starting the fire. Alas, however: justice delayed is justice denied, and the poor bovine is no longer here to enjoy the sweet satisfaction of getting her good name back.

Many years ago, a local sculptor created a Chicago-themed chess set. The kings were replicas of the Sears Tower, the queens were the Standard Oil Building (later the Amoco Building, now the Aon Center), the bishops were the John Hancock Tower, the knights were the Picasso sculpture in Daley Plaza, the black pawns were firefighters, and the white pawns were cops. The rooks, of course, were the Water Tower.

I'm pretty sure I saw the set profiled in the Chicago Tribune Magazine, but I've never been able to discover what issue it appeared in or find a copy.