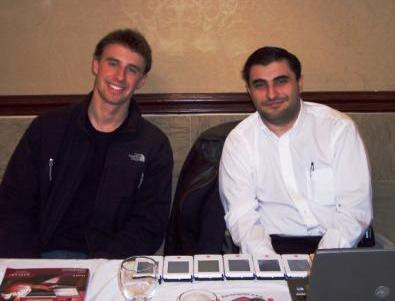 Adam Strunk (left) of the Chicago Blaze with tournament organizer Sevan Muradian
The Holiday Inn in Skokie was the center of local chess action this weekend, combing tournaments for the Illinois Girls’ State Championship, the Susan Polgar girls qualifier, and the Arnold Denker meet to determine the top high school chess player in Illinois.

Your humble blogger was there, and so was that national chess power couple IM Irina Krush and GM Pascal Charbonneau. Pascal reviewed games with the Denker guys as Irina helped preside over the Polgar tournament while preparing to face Armenian women’s champion IM Lilit Mkrtchian this week.

Members of the Chicago Blaze were on hand, including Adam Strunk and Ilan Meerovich, who competed in the Denker tournament. IM Jan van de Mortel stopped in as well, and it was all copasetic, despite the fact that Irina and Pascal are part of the Blaze’s U.S. Chess League rivals, the New York Knights (she as the team’s manager; he as Board One).

It wasn’t all sweetness and light, however. I lost a game to Chessdad64 that I probably could have won, since I was up a piece at one point. Once again my weakness in middle-game tactics (and his tactical strength) got the better of me, and I blew my advantage. Worst of all, since I botched the recording of the game, I’ll never figure out where I went wrong. Hence don’t look for that game on Wacky Wednesday. 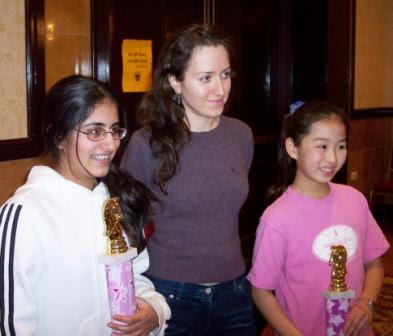 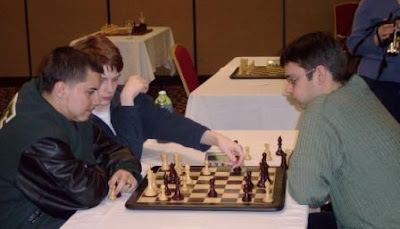 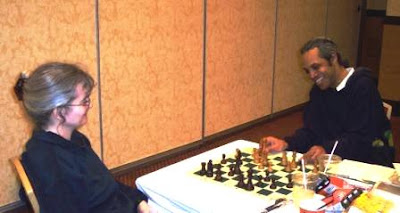