The Ray School Chess Club will hold its first official meeting of the year on Monday, October 15, but a few members of the club—four, to be exact—held an informal practice session at the Hyde Park Neighborhood Club today. A tournament scheduled for this morning had been cancelled, but HPNC executive director Peter Cassel let the chess-hungry Ray kids have some skittles time nonetheless. (Thanks, Peter.) The foursome played a spirited round of Bughouse and some blitz. (Click on the arrow button to watch the video.) 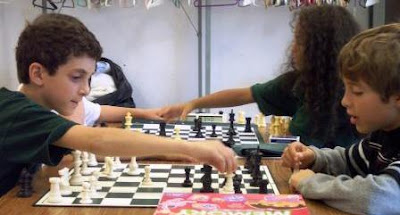 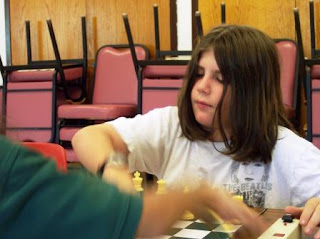 Ray fourth-grader (please see comments) Phillip Parker-Turner won another tournament this weekend: Glenn Panner's Orland Park Scholastic. . . . Who is Mark Jutovsky, you ask? A guy who hasn't played a rated tournament in ten years, that's who. Mark's decade of inactivity, however, didn't stop him from winning Saturday's Evanston Chess Economy Open with a perfect 4.0/4 against a tough field. . . . In other news, the chess world has a new champion today. He’s Vishy Anand of India, and he’s been one of the top players in the world for many years. Now he’s the best. Vishy won a tough tournament in Mexico City against six other players, including the previous champ, Vladimir Kramnik.

Are you sure Phillip is in 5th grade? His mom told me 4th grade last week. Anyway, nice video!

Oops. You're right: Phillip is definitely in the fourth grade. Good catch, Lamarr. Thanks.

I watched the video and i must say that white didn't punch the clock with the hand she moved the pieces. Which is against the rules. It's better that you learn the kids this in the beginning otherwise it will be difficult to learn when they are older. Old habits dont get away over night.

Thanks, Johan; we'll work on that.

By the way, for the record, both players on that video are boys. :o)